As things wind down for the month of May, I have had some thoughts on my mind. I felt like making a blog post on it because despite me having a few blog posts ready to go, my mind is blocked. So, I hope that my thoughts and observations will be of some use to you. 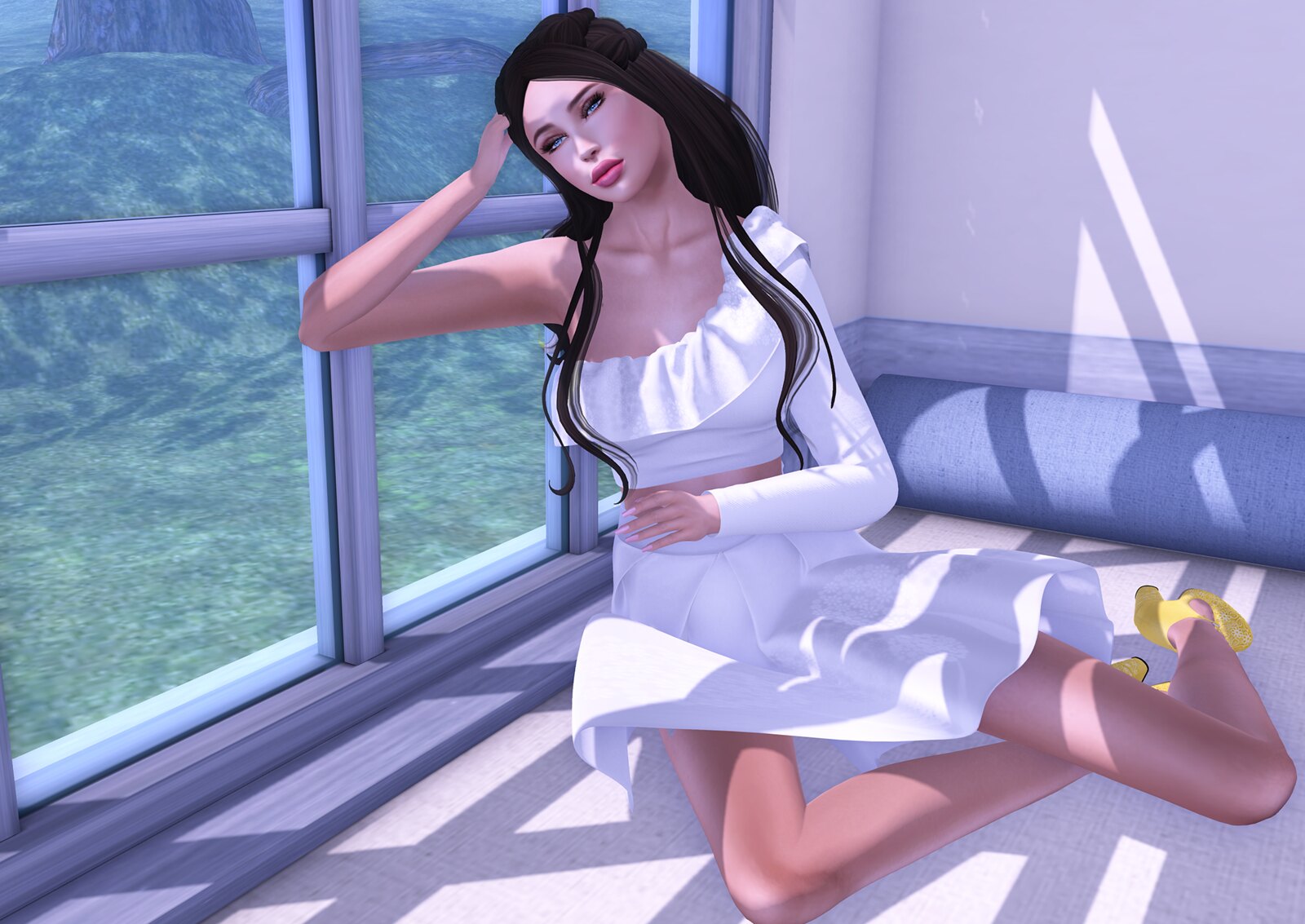 END_OF_DOCUMENT_TOKEN_TO_BE_REPLACED

Hey guys! I have been working on a new project of sorts for my blog. I am doing a new series  called, “What I Wore Today”. For now, I will not be posting these photos on Flickr, so make sure you follow my blog at WordPress or at my Facebook page if you do not want to miss out! 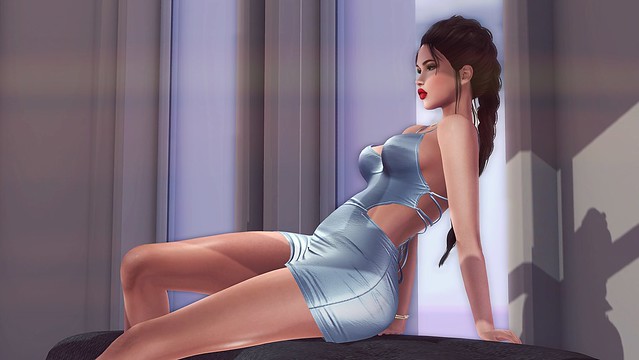 END_OF_DOCUMENT_TOKEN_TO_BE_REPLACED

Hey guys! If you did not already know, the 2016 Fashion for Life sims are now open and ready for you to shop ’til you drop!

One thing that I liked about this year’s Fashion for Life is the guidebook that has been provided for us. It’s a quick way of seeing what brands are participating at Fashion for Life, the FFL committee, photos of each themed sim along with their SLurls, and schedules of music performances and fashion shows.

There is also the treasure hunt, the photo contest (entries are due March 17th ), and the auction on March 19th.

If you do not want to look at the guidebook to have access to the SLurls, here they are now:

FFL4 – Moulin Rouge (sponsored by Ever An’ Angel. – Ever Courtois and Angelique Wickentower)

END_OF_DOCUMENT_TOKEN_TO_BE_REPLACED

Pencil skirt. Patterned blouse. Black heels. Fancy hat. All of the items that I have named are good to have in your wardrobe. They make great staples for someone who wants to be stylish and classy. What if I told you that you can get all of these items for Ghee’s January VIP gift? 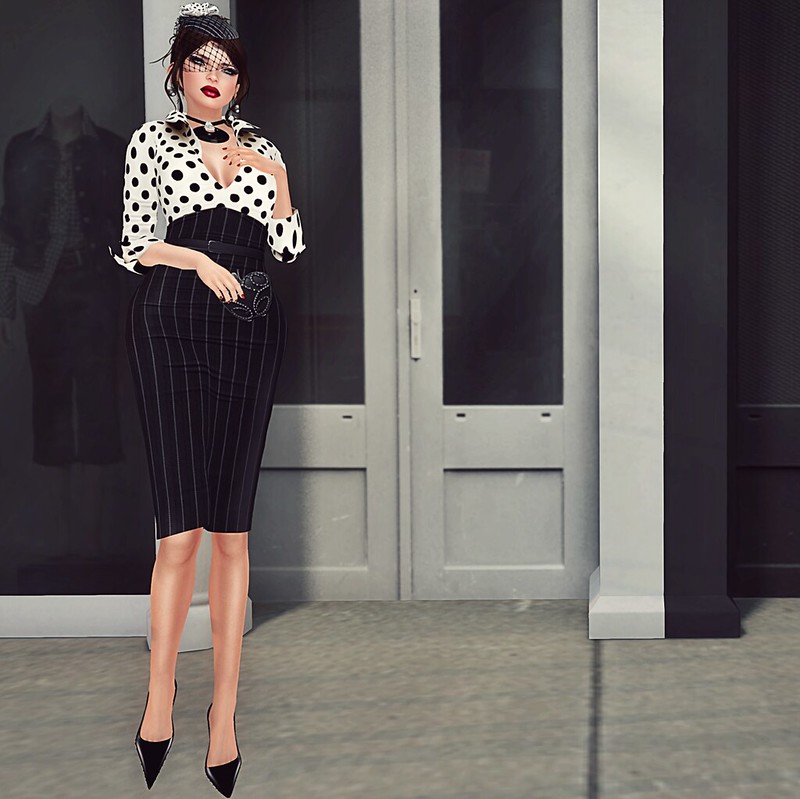 The first thing that comes to mind is that we have polka dots and pinstripes.  I can hear some of you say, “You’re not supposed to wear different patterns!”. Most of the time this is true, but since black dots on a white blouse is pretty neutral, we can get away with matching with a black pinstripe pencil skirt. This combination makes a bold statement, but doesn’t make you look crazy. The pillbox hat and winklepicker heels gives the outfit a vintage twist back to the 1960’s, which overall gives the outfit a unique look. The shoes are for the Slink High feet only.

You still have time to pick this up at Ghee – while you are there, make sure you check out the latest items ^^

END_OF_DOCUMENT_TOKEN_TO_BE_REPLACED

Hey – I’m back guys! I got my computer earlier today, and everything seems to be in tip-top shape. Now, on to the fashion!

Ghee has had a lot of nice items this month that I did not get a chance to tell you about. 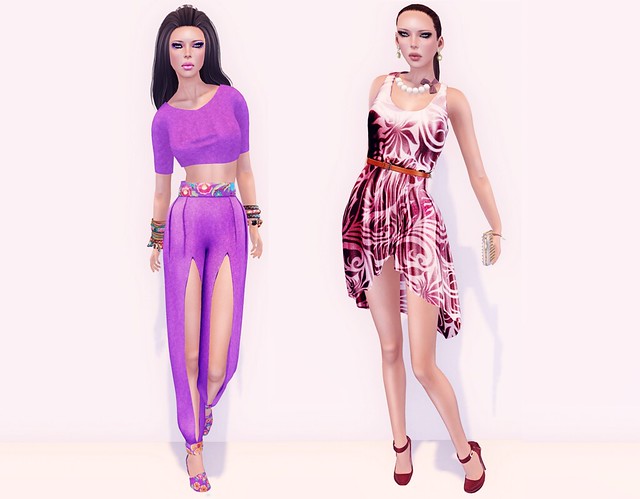 On the left I am wearing the Ghee Scheherazade top and pants that was recently at the Instruments. I looked up the name “Scheherazade” and according to Wikipedia, she was legendary Arabic queen and the storyteller of One Thousand and One Nights.
I have on the shoes as well, and you will need Slink mid foot in order to wear them.

The Deidre dress, shoes, and necklace in burgundy is ideal if you want a classic vintage look. Deidre comes in 5 colors, and you can also color change the ribbon on the necklace to go with your dress. You can see that I am wearing a bracelet – that is actually the necklace resized. You can try that with just about any necklace that is able to be modified.

Since both of these creations were at events that recently ended, they should be at the mainstore shortly if they are not there already. Here is your chance to pick them up if you missed them this month! 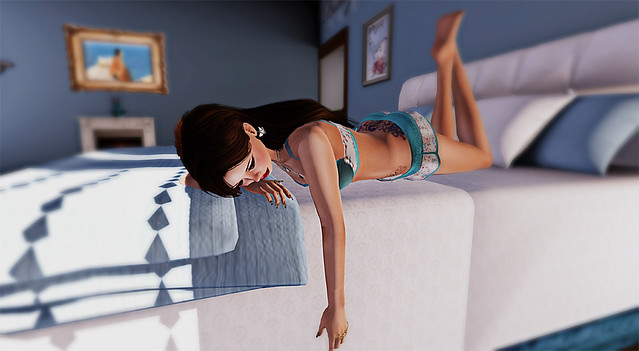 Don’t want to get up…

Happy December everyone! I am sorry that I have been away. Classes are trying to kill me with work – ever since midterms I felt like I couldn’t catch a breather. When stress comes, creativity goes. I’m sure you have been there 🙂

Now that the days are getting colder, it’s been harder for me to want to get up out of bed.  First thing I do is to turn my heater on ( I don’t leave it on when I sleep) and as the room heats up, I start to stretch out in bed, trying to wake myself up. Then after my room warms up some, I’m ready to get up. 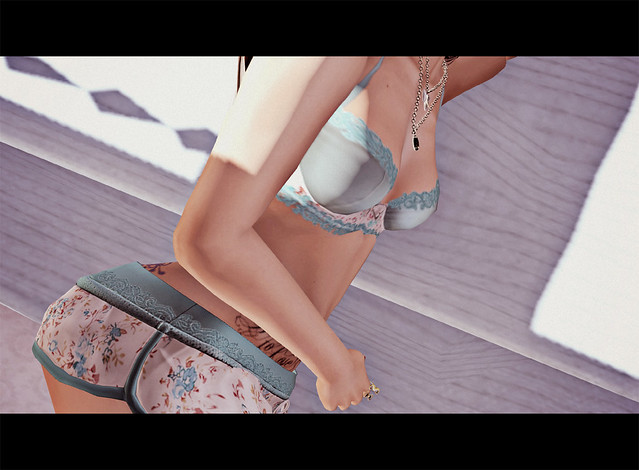 One thing that I like about December is that stores have Advent calendars – free goodies for everyone! The necklace and earrings that you see in these pictures are from Chop Zuey – today kicked off their 12 Days of Christmas gifts! Technically, the 12 days of Christmas begins on Christmas Day, but I like Second Life’s version better.

Besides Chop Zuey, I think MadPea  Hunt, ghee VIP Hunt, and the KittyCats Advent Calendar are worth checking out. 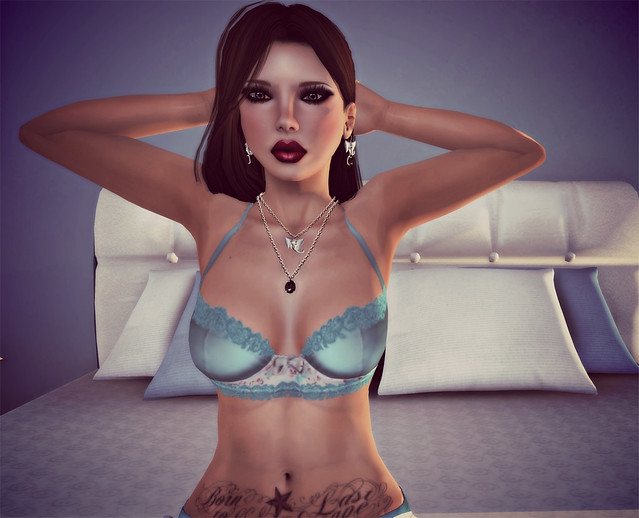 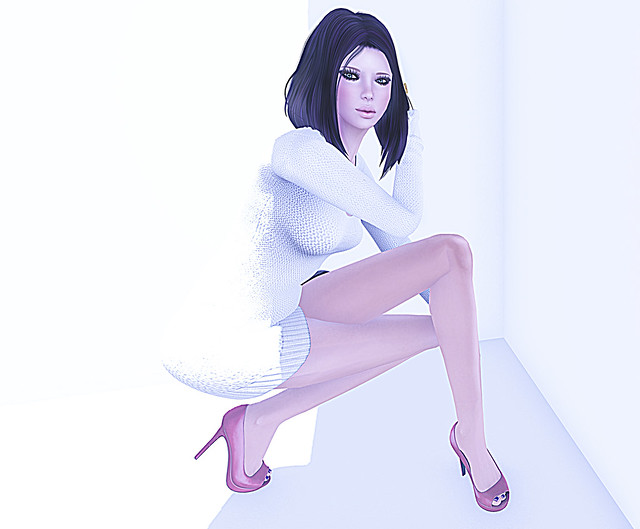 Hey guys! I hope everyone had a happy Thanksgiving (for those who celebrate it), and was able to take advantage of sales both inworld and in real life.

Speaking of sales, I want all of you to know about the 70% off sale at Pure Poison. It looks like Pure Poison is transitioning into making mainly shoes, but I knew them to be the store to go to for great accessories. If you look up in the outlet, there are a ton of 15L and 23L items that are of great quality. it’s like they are giving away the store – you can put together a whole outfit for under 100 L!

Some other places that still have sales are:

For a list of more sales, check out Seraphim’s Black Friday page.

We encourage you to visit door to door for some good ol’ fashioned Trick-or-Treating. Be patient and knock extra hard! Sometimes the neighbors might not hear you the first time, but we’re fairly certain you’ll get a kick out of the tricks and treats up their sleeves! After you’re done Trick-or-Treating, the fun doesn’t end! Search for the secret entrance to part 2, which will lead you to a terrifying experience you’ll never forget.

Here are a few photos from the event:

What are those white things?

Hmm…maybe it’s time to get up out of bed…

Haunted cafeteria….and you say the exit is where that floating table is…

More beds? But they scare me…

Is this really the exit? Or am I in Hell?

For the first set of photos I had to change the windlight so you can see the details better. It’s a lot darker than that outside. The rest of the photos are using the region windlight, just had to brighten it to the max so you could make out some details. Again – very dark. 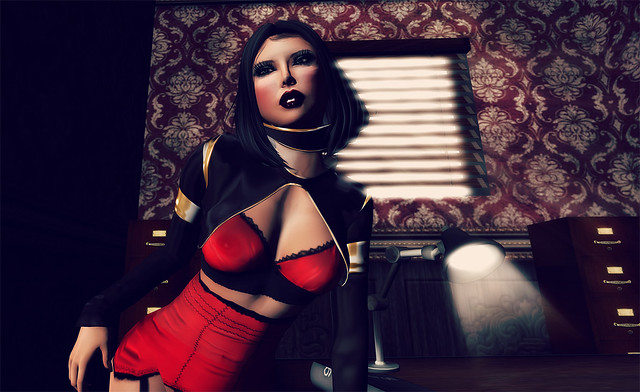 Hey guys! A few nights ago, I had a dream…it was the first time in a while that I remembered anything. Afterwards, I thought about what a friend recently told me. She said that for her new job in her ideal career, she would have to spend a significant amount of money and time traveling there. The dream made me think of the following question:

Would you be willing to work fewer hours, less pay, and/or more time traveled to work at a place that you consider ideal? Or would you rather what’s considered a standard job (40 hours/week, 9 am-5 pm)?

If you want to know what the dream was about, keep reading! Feel free to interpret it as well ^^ 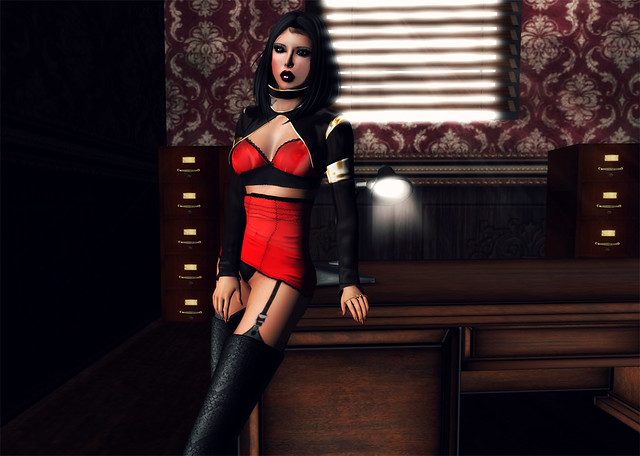 I was outside of what seemed to be an auditorium, waiting to be allowed inside. People were dressed in business attire, and it reminded me of some seminars that I had attended in the past. People entered and sat on fold-up chairs and as they sat the leader would give them a task based on their abilities. Someone that was right before me was assigned to promoting the event and making everything look pretty. The leader asked me to follow her outside and I thought she was going to ask me about web design since I had it on my resume.
When I came outside she was sitting at the table. She accused me of being lazy because I was only working one day a week. I said it was hard to find jobs out there. She scoffed and said my task was to meet with her once a week and show proof that I was looking for a job. When I complained she said I had gotten a scholarship to the program so I should be thankful. I was about to blow up at her when I woke up.
I  had mixed feelings about the dream. On one hand, despite her lack of people skills, she was actually trying to help me look for a job. On the other hand, I had never asked for a scholarship and she had made some serious judgments against me because I didn’t fit into her box. I guess we all have our moments when people judge us for what they see on the surface. They assume one thing instead of asking why we choose to do certain things, not just our career choices. 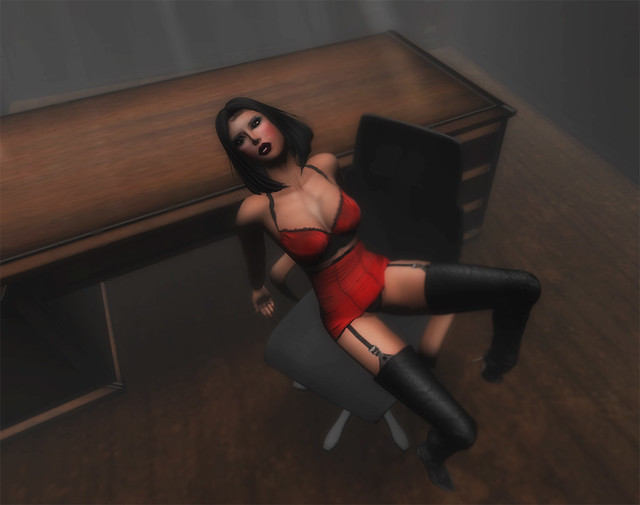 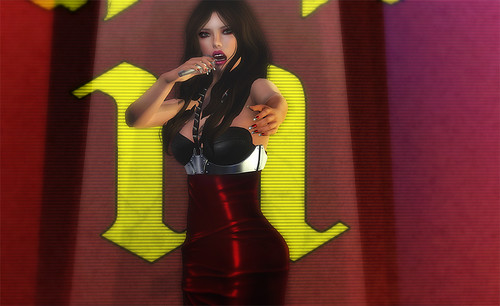 Hey guys! Even though the Rhapsody event is now over, I got inspired to do this photo after visiting a photo studio and discovering that they had the stage from Hopscotch there. Since I had bought a dress from Pixicat, I figured, “Why not?” I have not seen the items in the stores yet, but you can always ask the creators about them!

During the Rhapsody event, I found out about a Relay for Life fundraiser called Fiction for a Cure. According to the website:

When I went to the place, I took pictures of the various raffles and silent auctions that they had. I think some people will be very happy residents with the prizes that they will get ^^

So stop by before the 18th and check it out!