This month does not look that great for me.

With the exception of getting to go to see Jason Bourne at the movies for my rl birthday, I don’t think August is turning out to be a good month.

– My dad has spent roughly the equivalent of a week in the hospital. He was hospitalized the end of last month, got released after several days, and then went back after he didn’t take his meds.

– The recent heatwave we had has made my room unbearable to be in, never mind focusing long enough to get any significant work done. My room is easiest the hottest place in the house.

– As a result, I haven’t been able to sleep that well. It seems like I can sleep pretty much anywhere else. For instance, the other night I slept on the living room couch…was able to fall asleep a lot faster for some reason.

– For the last several days, I have been dealing with a sore & scratchy throat. Tea, lozenges, honey, water, vitamins…all so it won’t progress further. This weekend I have been coughing a lot as well 😦

One thing I have been doing this month is a LOT of shopping and browsing. There are so many sales on the grid this month, even I had a hard time keeping up.

Hair: Besom – Fetch
Outfit: paper.arrow gym.shorts.&tee (@ Whimsical)
Boots: EMPIRE – Iberis – *MIDNIGHTMADNESS* (not sure if this is in the store or not)
Poses: an lar [poses]
Location: Lionheart Ahadi

I got this hair from Besom’s 99L sale. I have no idea how long it will last, so you should go there today and see if you can find anything. The outfit is from paper arrow co, who is at the Whimsical event. The event lasts until September 8th, so you still have time to shop ^^ I also got a dress by Storybook as well.

Now, you may be wondering why I took a picture next to a “For Sale” sign next to it. Both photos were taken at Lionheart Ahadi. If you guys know me or have been reading my blog for a while, you would know when I was working at EDS, we had our store at that sim. Shortly after Jania closed down Erotique Designs, someone else had immediately taken the parcel, and kept it for a number of years. So I was surprised that the parcel was for sale when I went to visit the neighborhood. For some reason, the Lionheart sims look different….almost like they did some renovation to the streets and sidewalks. That’s a good thing, for if a sim looks the same as it did from 2011, it would be outdated by now.

Now, what else did I get?

Reign recently had a sale, so I got the Kendal heels, 2 pairs of April sandals, and 1 pair of the suicide heels. I think some people were upset because they had just recently bought a couple of the shoes that were on sale. But hey – you got to wear them first ^^ I didn’t open them yet, so I just linked you to the Flickr photos from Reign’s photostream. Also, David Heather had a nice sale last week – 75% off of items. It threw me off at first because you have to first pay the entire amount, and then you get refunded the difference. I picked up another Kang Blazer (got the cream color when it was first released, and then at the sale I got the black) and the Midi dress in nude.

I saw that Glam Affair finally released a system skin at Kustom 9, called Yumi. If you read my blog, I have pretty much been wearing Luna for a while now. 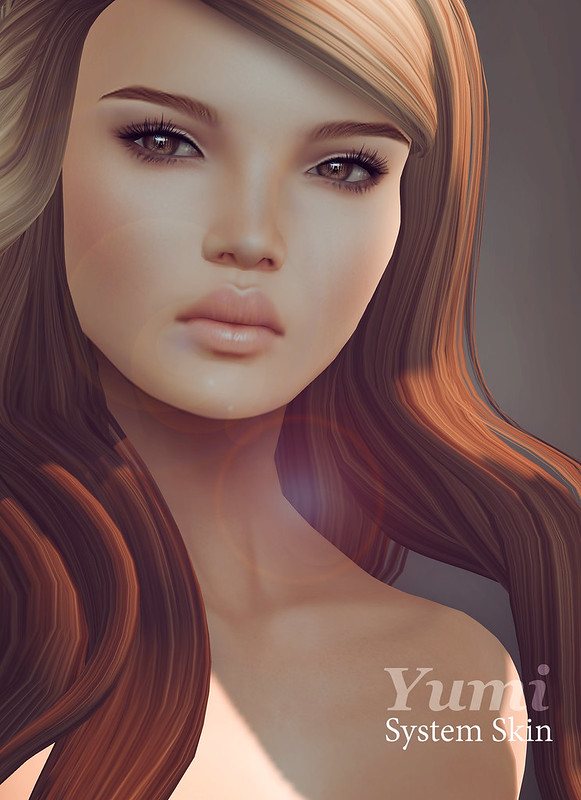 Even though I liked Yumi when I tried it on, the highlighting around the T-zone area made me hesitate to get it. The last time I wore a skin where the face had a different tone than the body, people kept telling me that I looked two – toned. But then if I don’t get it, then this will probably be the last time I see it if this FB post is true.

I grabbed a bunch of demos from Tres Chic and Collabor88, and I am still deciding on what to get. And did you guys see the latest release from Lelutka?

The hair on the left looks really thick and luscious…even without the headpiece!  But I encourage you to look at both hairs. The hair on the right has a headpiece as well, but I would imagine it would come in handy if you had to wear a headpiece or a hat for a certain styling, but needed the right kind of hair.

This blog post took me 3 days to do…which is incredibly slow for me considering that the couple of photos that I did take were basically snapshots with shadows and cropping. But as I said, there are many events and sales happening in SL this month, so stay tuned for more coverage ^^