Have you been to the Fantasy Faire yet? If not, you still have some time. So far, the Faire has raised over L$6.1 million. That’s over $24,000! On that happy note, Ill show you some more things…just in case you missed them on your travels. Aikea Rieko from [The Plastik.] has a ton of items at Fantasy Faire. Because there are a lot of quality items that I don’t want you to miss, I will show some of the items, and then direct you to other blogs where they covered other parts.

There are 10 different color variations to the Draziira skins. I have on the Anjuna in the photo, and then you have Elora, Golden,Heat,Inferno, Obsidian,Oceana,Purple, Silver, and Toxic. Draziira has both men and women skin versions. You can check out RORS’ blog to see a peak at the male skin here, and Kismet did a good job in showing the 10 color variations here. 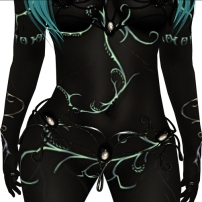 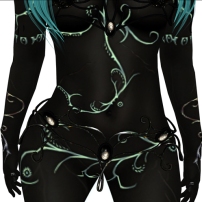 In the above photos, you see how the body looks like normally, with suns, and with dots. The Draziira skins have a variety of makeups, demon fades, and tattoos.

The above shows some of the varieties of the face tattoos, which are similar to that of the body. Natsumi shows the demon fades here. I really like the blueish looking one shown in the photo. The one that came with Anjuna is a blueish-gray fade – looks as if the hand and arm was frozen and/or could withstand sub-zero temperatures.

The above photos show the different eyes that come with each skin: Anjuna Glow eyes, Frost, SheThing, Sickness, Vaele Coll(Glaze), Bloodless (in gold and silver), and from the OniCollection: Cumulus Grey, Magicka Blue, and Underworld Blue.

I’ve mentioned the Vandariel armor before, and that I was wearing the Astral variety. Brandi shows a variety of the armor in her post here, and you can see how you can match the armor to the skin variations. Tannypo goes into great detail to show you all the different variations of the armor here, and as mentioned in both posts, there are HUDs to change the color of the skirt as well as the gems on the armor.

For all of you mermaids out there, The Plastik also has the Arkasia mermaid skins. RORS did great coverage on the skins here.

All of The Plastik items can be found at Evensong Woods. The Enchanted Moon Pose I have for the first photo at the beginning of the post can be found at Musa, located at Magnificat.